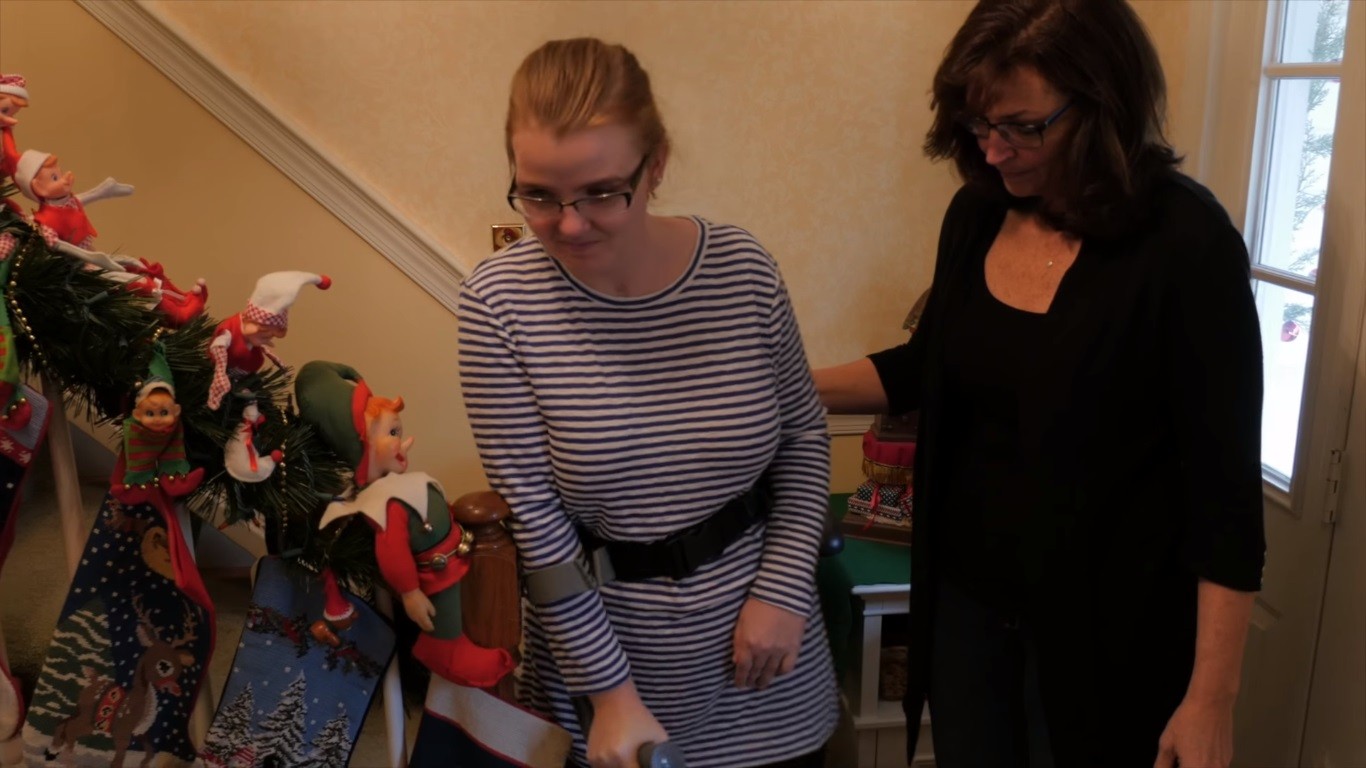 March is Brain Awareness month and this year’s theme is ‘Not Alone’. We thought this was fitting as we have been working closely with Corey and her family. What more of a perfect time to show Corey’s progress and how her relationship with her mother, who is also Corey’s caregiver, who has helped to create a unique kind of therapy geared for Corey.

Prior to Corey’s accident, she had aspirations of becoming a Chef and attending Johnson & Wales Culinary School. She was in a coma for several weeks and although she could open her eyes, her responses were inconsistent. She was in a minimally conscious state.

We moved from the trauma ICU to Bryn Mawr Rehab. Corey was on the low level wing (which meant 24/7 observation). The therapists work very hard with all their patients but to revive the low level patients they have added pressure. Insurance companies want them to show functional improvement in order to approve the patients’ length of stay. Corey was not moving any part of her body including her eyes; they were fixated to the right. All she could do was blink. Needless to say, we could hear the ‘coverage clock’ ticking.

I was researching every article and blog I could find on TBI. One of the resources I found mentioned incorporating the survivor’s favorite hobby in their recovery regimen. Another discussed Coma and the 5 senses. This inspired me to incorporate “Cooking therapy” into Corey’s recovery.

We began with fresh spices. I would hold assorted spices such as rosemary, cilantro, thyme, basil, fennel, cinnamon, lemon, etc. under her nose to see if we could initiate a physical response. I purchased colorful measuring cups to not only identify color but size as well. I would help her try to point and grasp them as her right hand began to move.

We were discharged after 7 months. Corey came home with limited movement. She could hold her head independently, move her right hand and leg, move her eyes to follow us but was not speaking, opening her mouth or swallowing (she received her nutrition from a feeding tube). Within the first year at home, the home therapists continued using cooking therapy with occupational and speech therapies.

We purchased adaptive cooking utensils, cutting boards and tools to help her cook. We would place the ingredients in separate bowls. As we read a recipe, Corey would reach to choose the proper ingredient, measure, pour, and stir her culinary creation. Once cooked, she’d plate the completed dish in 10 Tupperware containers to donate to our local churches for their meals on wheels program.

Cooking therapy has evolved as Corey could physically and cognitively do more. Today, with assistance, Corey reads recipe books, chooses what she’d like to cook for the week, uses the weekly circular and grocery store map, writes our shopping list for the necessary ingredients, organizes the list by aisle, and walks pushing the cart about half the distance of the full store. The evolution of ‘Cooking therapy’ practices a multitude of skills within the Physical, Occupational, Speech and Cognitive therapies.

Of all the ‘out-of-the-box’ ideas we try, cooking therapy has been the most successful because of Corey’s passion for cooking and her desire to become a Chef. She feels as if she’s “normal” when she cooks. She feels productive. She feels like herself…the woman she was, the woman she knows she is. Watching her in her element, I can see her regain her confidence. Cooking empowers her, motivates her, and sustains her. It keeps her focused and gives me hope that she will in fact, one day, fulfill her dream of becoming a Chef.